The 98 Hotel in Whitehorse, Yukon, has the second oldest liquor license in Canada. We are told this as we are walking down the street b a skinny man who has just stated that Finn is his kind of customer. We take the bait and go in.

Skinny man scoots behind the bar and produces a large Folgers can full of ice and and water and places it on the bar for the dog. We grab the water and take a table. The bar is old school dark and dingy. The bartender skinny guy comes over and we order a couple of pints of Yukon beer. He brings the beer and then announces that at the. Ninety eight they have a game for newcomers.
He commences to quiz us on each of the several animal hides on the wall. Wolverine, wolf, fox, Lynx, beaver. He helps with clues, but it wasn’t all too hard and we are awarded with a ninety eight hotel pin for our efforts.
A few colourful characters come and go, but at long last we are approached by a man who is clearly enjoying the evening. He stops by to welcome us to the ninety eight. He chats about this and he chats about that, all the while being watched by a thin, wiry middle aged woman. We will call her L. Finally L comes over and asks him why he has not introduced his new friends to her.
I introduce myself, then she asks me if her Paula is ‘ my woman?’ I reply that she is and L says something sharp to Mr. Goodtime, who tells her to ‘slow down.’ L goes to her seat and he apologizes for her behaviour. We can hear L at the other table accusing another woman of looking at her man, who is of course, our very own Mr. G.. Strong words are exchanged between the two women, and our new friend excuses hisself and returns to his table. Words of anger are spoken, and the owner yells at L to get out, reminding her that she was already banned from the ninety eight. L was yelling at this time, telling Mr. G. that he was a f@&?ing c**t and that she hated him. Demands for Ls departure were repeated by the owner and L finally left.
The barkeeper followed her out and locked the door behind her, with us locked in the bar.
Paula had her back to the commotion, which was maybe five feet behind her. Paula never moved a muscle during the entire exchange, which was smart, because I think that in the mind of L, Paula was the first woman that night to look at her man.
We finished our drinks and took our dog and our pin and left the ninety eight as skinny man apologizes repeatedly for everything.
We went to find the Elks Lodge, where Tlingipino Bingo was about to start, a game in which was a culinary, cultural, and transsexual collision of Tlingit and Filipino people over a rousing game of bingo.
We camped at Walmart later that night and looked forward to going to The Pit in Dawson City the next night, as it has the OLDEST liquor license in the country.

Below:  The 98 Pin and the Walmart camping 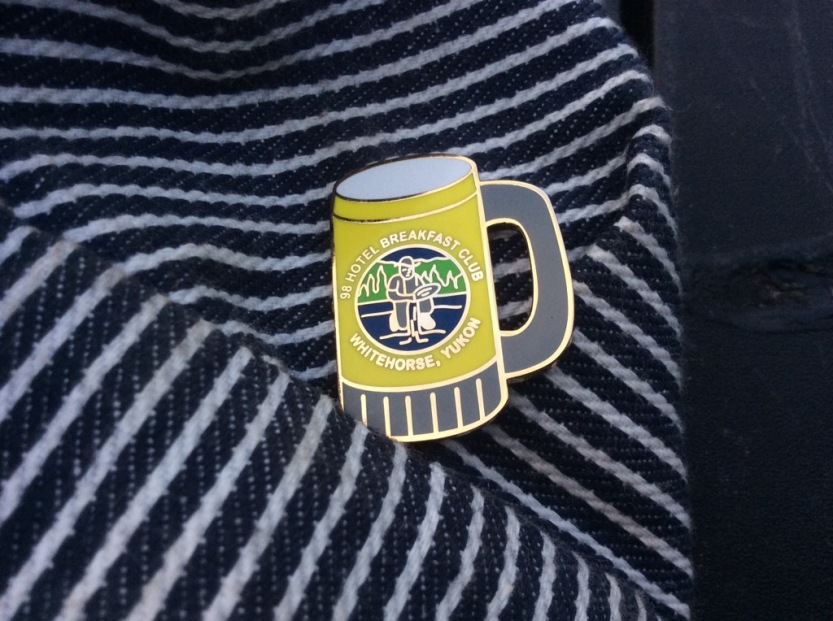