The table is maybe eighteen inches wide by two and a half feet long.  On it is a ballena, or whale, which is what Mexicanos call a quart sized bottle of beer.  Eduardo runs out for fresh cooked kettle chips, which are cooked in oil in street carts all over the country.  Rosina proudly concocts beer and Clamato drinks on the little table.  Eduardo returns with the chips and ‘Chetos’.  Sauce gets added to the snacks, chilli sauce, to be exact.  The honeymoon bikes lean against a wall a few feet away.  The light is low and everyone smiles collectively as the glasses are raised.”Salud!”

We drink, happy to be with our new friends again.

Stories are told of guilty dogs and long flights home.  The culpa de Finn.  More drinks are made.  More details are shared. Eduardo knows someone who can fix the camper.

We go out into what he calls the second most dangerous neighbourhood in Ciudad de Mexico.  The newlyweds walk ahead.  Eduardo is carrying his ‘tube’ – a two foot long piece of bent one inch pipe.  The tube is for protection, but not for us.  Eduardo plans to use it to beat off dogs that approach us.

He has become Finn’s bodyguard.

We are shown favourite spots. A park. A restaurant that specializes in birria, a brothy, oniony, sheep stew.  We go for ice cream.

We sleep well that night and the next day we are taken in a cab, with the dog, to see more sights.  We see the monuments that Rosina climbed to hang protest banners for Greenpeace.  They are enormously high and right on the Reforma, which seems to be a major thoroughfare in the city.  They take the dog to the park while we visit the castle. We see the human flies – men who climb a pole that must be eighty feet high and descend in a reverse Maypole, upside down, on ropes that are slipped around their wastes.  One of the men drums and plays the flute all the way down. It is dangerous.  It is also graceful and elegant. It is a fertility rite from Puebla, says Rosina, proud of her home city. 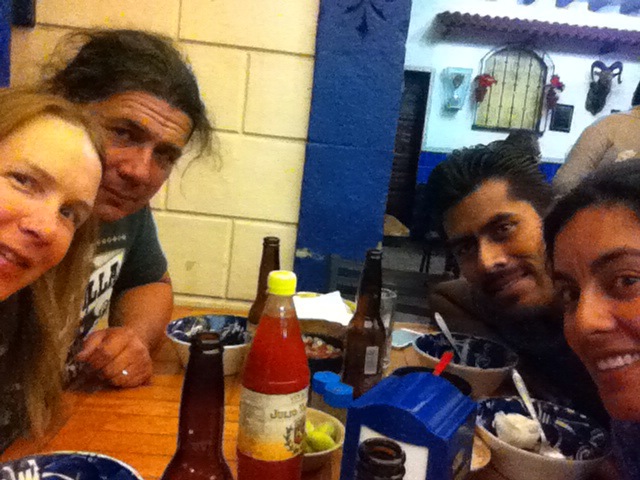 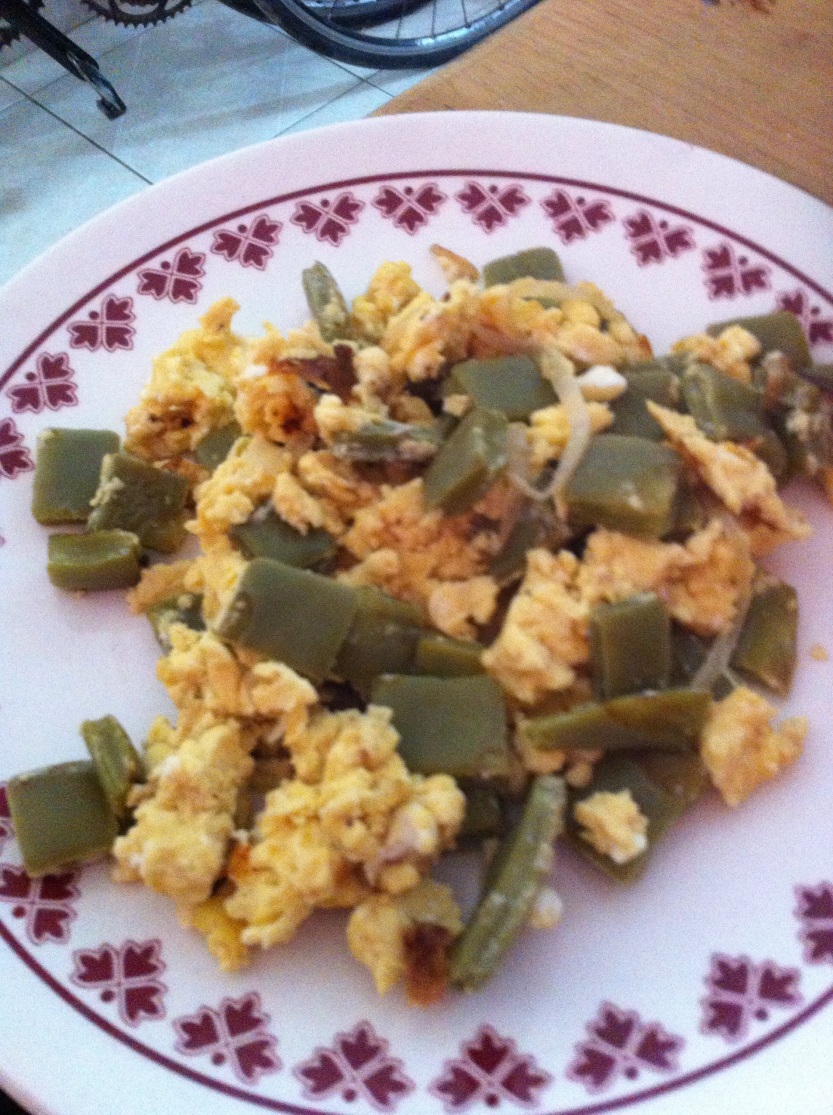 That night, camper fixed, we drive to the home of Rosina’s parents.  There is a shortcut through the most dangerous barrio of Ciudad de Mexico.  It is night.  Never drive at night.  The neighbourhood looks the part.  At a stoplight, a man sprays liquid all over our windshield and climbs up the front drivers side tire to lean over the hood.  He scrubs the windshield despite my protest.  He works until the light is green.  I roll the window down to hand him a five peso coin, unsure of what the consequences of not paying might be.  As we drive away, Rosina says that we should never roll our windows down in that neighbourhood, but rather just slip the coin through the smallest crack possible.

We follow the’ant’ – Eduardo’s small panel truck that he uses for his music business.  We stay right on his tail through some crazy traffic as we leave the city.  Safely out,  Rosina hops in with her husband and we drive on through the next two hundred kilometres of darkness.  We nearly lose them after a toll booth and speed on at seventy miles per hour, tired, confused that we lost them, and anxious to catch up.  We finally spot them and slow down.  Time goes by and eventually we turn off the highway.  We turn again.  And again.  Turns upon turns and topes upon topes upon topes, we eventually come to a narrow driveway with sharp right- angled turns.  A gate is opened and we follow through.  We park in tall grass under a tree.  Rosina is already embracing a man and a woman who will soon be confirmed in our minds as her parents.

The table is maybe six feet long and maybe three feet wide. It sits upon a darkly tiled floor. Rosina sits at a computer, flipping from photo to photo as her parents – Rosina and Ramon – watch and discuss with great interest. Eduardo stands behind her, and comments as they go through. It is a comfortable privilege, being flies on the wall at this moment when the Gonzalez family has reunited after a month and a honeymoon. Spanish flows rapidly and enthusiastically, Paula and I catching bits and pieces. The language is Spanish, but the meaning is love, through and through. 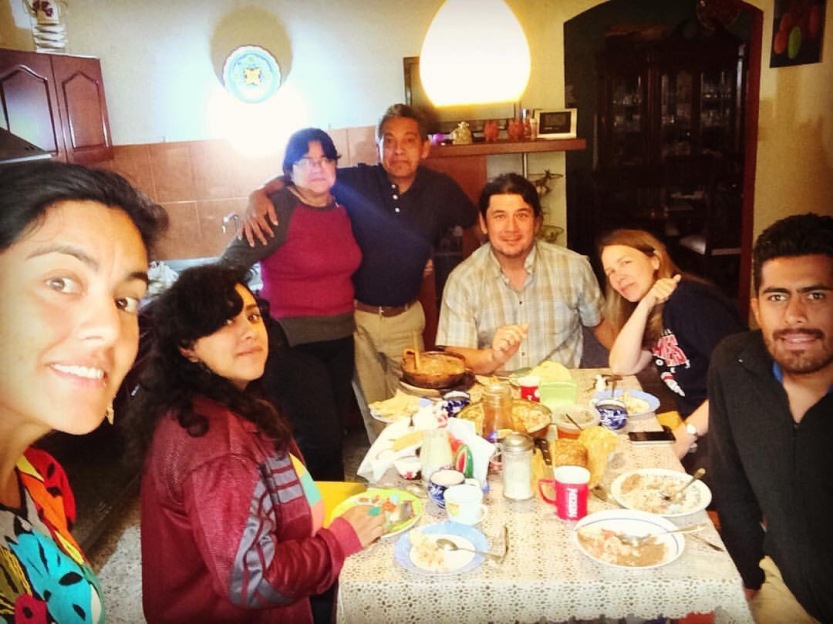 The same table will host us for three nights and days. We meet sister Anna Maria, a professional artist and illustrator who lives upstairs and whose infectious laugh fills the kitchen. We eat enormous breakfasts, lovingly prepared by Rosina Sr., who won’t let us help. We share the bottle of Senor Enrique’s mezcal that I bought. I make a bread pudding to go along with Mama Rosina’s delicious meal. We are given home- cooked Mole Poblano and tamales wrapped in banana leaves. Freshly prepared agua fresca, a delicious combination of just squeezed juice and water, perfectly frothed in a blender.
The entire family takes us to the local Sunday market in the town square. They treat us to everything, with great pride. We visit the church where our friends were married. Hundreds of years old and ornately carved and gilded in the Rococco style, it is breathtaking to behold, and it is not in any guidebook. The caretaker unlocks a door and invites us into a chapel that is being lovingly restored, as time and money permits. Eduardo gets his hair cut.
On the return we pull over by a roadside hut. We get out. The specialty here is a mixture on beer, ketchup, and various savoury sauces. To these are added two freshly shucked raw oysters. Five shrimp garnish my pint glass to round it out. Everyone else gets full litres. Ramon orders Caldo de Camarone, which turns out to be a sixteen ounce glass filled three quarters full with fresh shrimp, which are drowned in a delicious spicy tomato concoction. I marvel as oysters are shucked by a man at high speed as his little son watches with pride. The boy, who may or may not be school aged, picks up an oyster and a knife to imitate his father. I wince at the scene, but dad calmly shows his son how to do it properly, and a new member has joined the family business, proudly showing off his first oyster to his parents and grandparents, aunts and uncles, all of whom are busy at this roadside family enterprise.

On the second night, we sadly say goodbye to our new friends as they have to go back to Mexico City to work. They leave us at the mercy of the family and head off into the night. We plan to push on for Oaxaca the next day. After Finn receives a much needed haircut.
The haircut did not go as planned. The veteranarian who in Mexico is also a dog groomer, has a shop across from the Gonzalez’ family bakery – the Panaderia Santa Fe. It turns out that Finn could not get in this day. It also runs out that Ramon has other plans for us!
Ramon insists on taking us on a day trip to the pyramid at Cholula, then for a tour of their home city of Puebla. Anna Maria is called in to mind the shop, whilst Rosina Sr. takes us on a tour of the local convent. The ceiling of which is painted with strange creatures seemingly from other mythologies.
We are whisked away by Ramon “Speedy” Gonzalez and his wife. It is nearly an hour to Cholula, Paula, Finn and I are in the backseat of their SUV. They take the dog while we visit the largest pyramid on earth, by area. The Catholics built a cathedral on top of this one.

Inside the world’s largest pyramid

After Cholula, we head into Puebla. It is with obvious pride that we are toured around their home city. We go to favourite streets, to cathedrals with ceramic tiled domes, to public squares. Each time, they graciously take the dog so that we may enter. Later, it is revealed that they have been taking several selfies with Finn while we were inside. Ramon points out architectural features and explains that it was important for him as a father to nurture an aesthetic appreciation of these features in his daughters. We are taken for ‘tacos Arabe.’ Ramon orders a kilo of spit roasted pork and w assemble the delicious food at the patio table, facing the city square. We are sung to in Spanish by a street performer. Ramon and Rosina are openly affectionate with each other, after more than thirty years of marriage.

They take us to the artists’ barrio, then to fortress, overlooking the city, where Ramon explains that they used to drive up there when they were dating, inevitably having to bribe the local police to be left alone in romantic bliss. The night ends at the farmhouse, over aguafresca.
The next morning we are back in town for Finn’s spa appointment. Rosina shows up to watch and Ramon helps me find a hardware store to make some repairs to the camper. Rosina helps us buy some more time on our phone plan. It takes two hours for Finn to be fully groomed.
We meet in front of the Panaderia. We hug our new friends. They pass a large brown paper bag, on it is written, ” For our Canadian friends.” It is full of a selection of the bakery’s best.