May 1, 2016: Leave San Jose, Costa Rica airport hotel and drive well into Nicaragua. Latin borders are a mess, but at least at this one, there were no helpers and we were the only car. Nicest hotel of the trip, by the way, at less than fifty bucks.
May 2, 2016: Drive from mid Nicaragua to mid Honduras. On the way, we tried another tactic with Nicaraguan police stops. When they waved at us to pull over, we simply smiled and waved back. The rear view mirror showed the police officer throwing her hands in the air before she went back to whatever It she was doing. Stayed at decent Hotel in Honduras, with armed guard.
May 3, 2016: Happy Birthday Emily! Drove from Honduras to El Salvador. Came to border crossing of our extortion, noting where it occurred as we drove buy. Chased in taxi by a desperate helper as he tried to get our business. “Su ayudar no es necessito ,” ends his quest, and we continue, unmolested. We import the car, at customs, which is 4 km away from the border, only to be told to go back to have the dog’s papers stamped. We did, the agricultural inspector not even seeing the dog. Latin borders make no sense.
We stay at Afro and Amelia’s house in the middle of El Salvador. Kind and caring people whose hospitality was incredibly generous. In their garden I pick mangoes and cashew pears. They send us away with ten pounds of mangoes and some cashews. Amelia even served us cashew pear juice. They tell us to stop for nothing until we get to Guatemala. 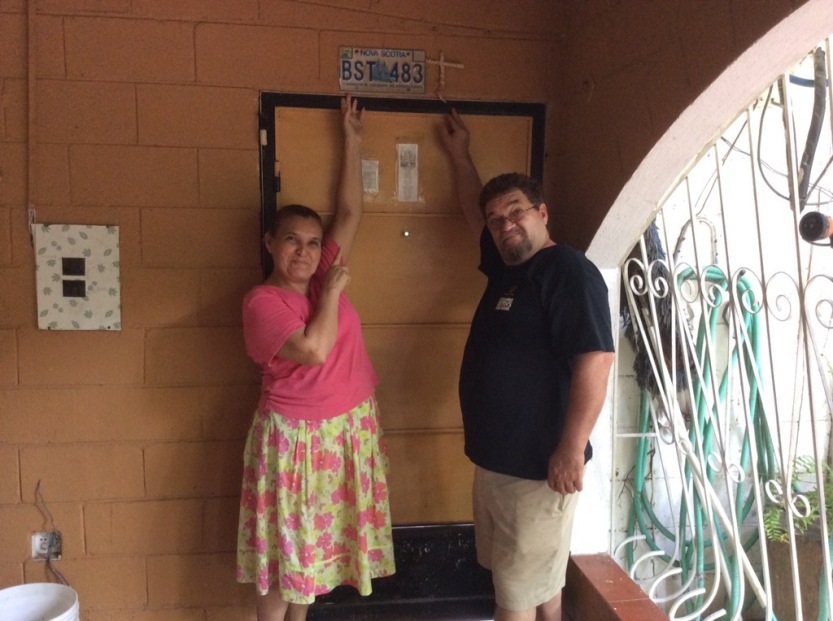 Above:  Amelia and Afro 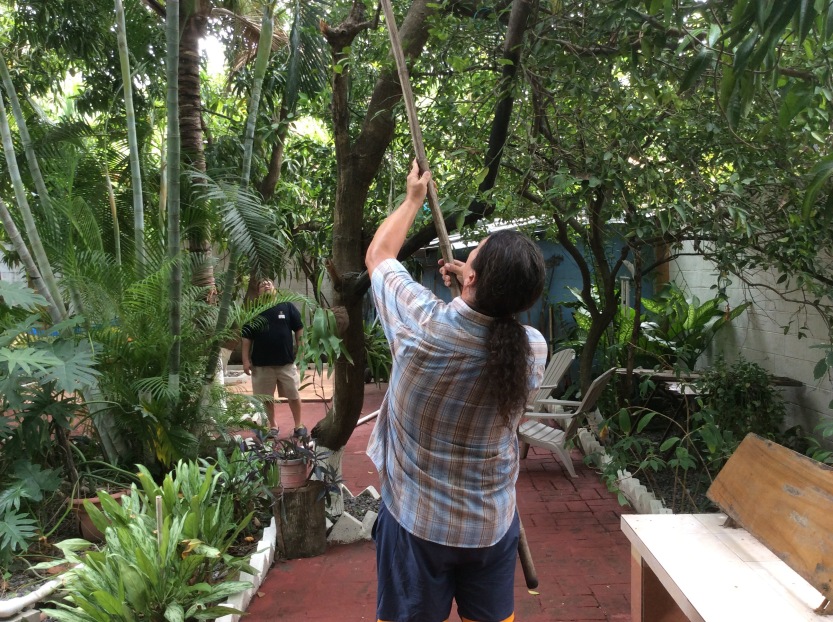 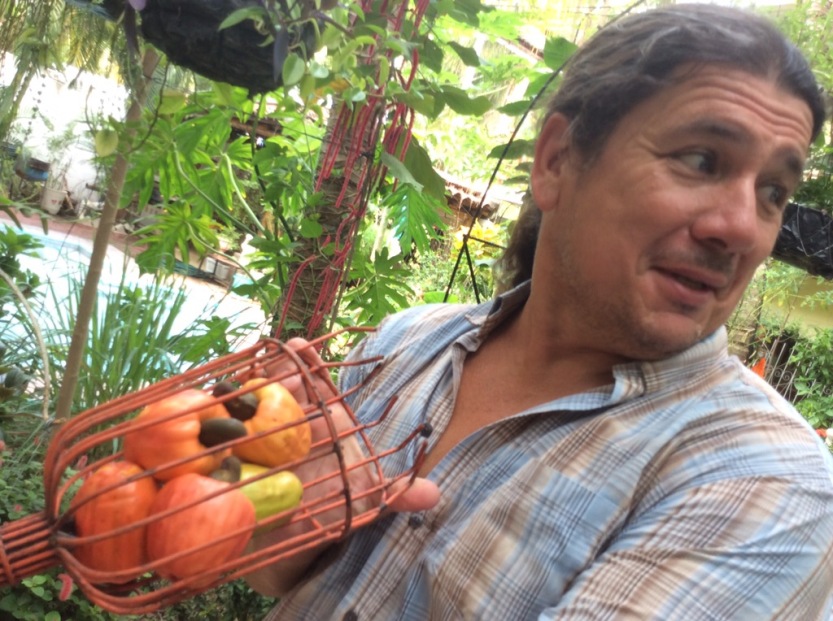 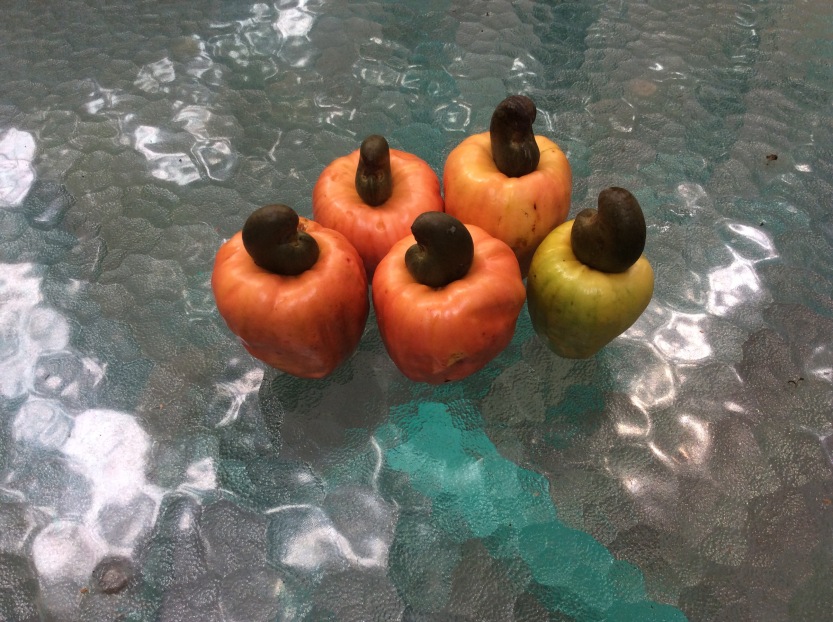 May 4, 2016: We drive from our new friends’ house in El Salvador to Antigua, Guatemala. We are getting smarter at the borders. They are still crazy but we are onto the pattern. Exit stamp on passport. Cancel car importation permit. Leave country. Cross border, usually a bridge. Get entry stamp on passport. Get new car importation permit. Get dog papers. Sometimes pay a special municipal tax for the town you have to drive through at the border. Enter new country. Occasionally throw in finding an unmarked official for a signature, or having somebody leave their post, or direct you to someone else because they cannot be bothered to do their job, or pestering the person who sent you away to do their job because another official told you it was the only place to get the stamped piece of paper, or fill out forms that you watch get thrown into drawers, or going to find a private copy place because they need three copies of the same document and do not do this themselves. Or, watching an entire office of employees not serve you because they are frantically running around cleaning the office because their supervisor is coming in.
On special days you may get to fend off corrupt border officials looking to make some money on the side. These have included Mexico to Belize, where we were asked to pay again 1100 pesos for our tourist cards; Guatemala to Mexico, where we were asked to pay two USD each to leave Guatemala. Demanding a receipt each time stopped this foolishness, as the corrupt officials could not issue one.

May 5, 2016: Antigua Guatemala to Tonala, Mexico. We revisited the market in Antigua after spending a few hours with Matt and Bea, who were still in Antigua after a month. Great to see them again. Mexico gets the gold star for logical border crossings, although we had all of Amelia’s fruit confiscated and two cartons of milk. He even wanted the dog food, but we talked him out of it. 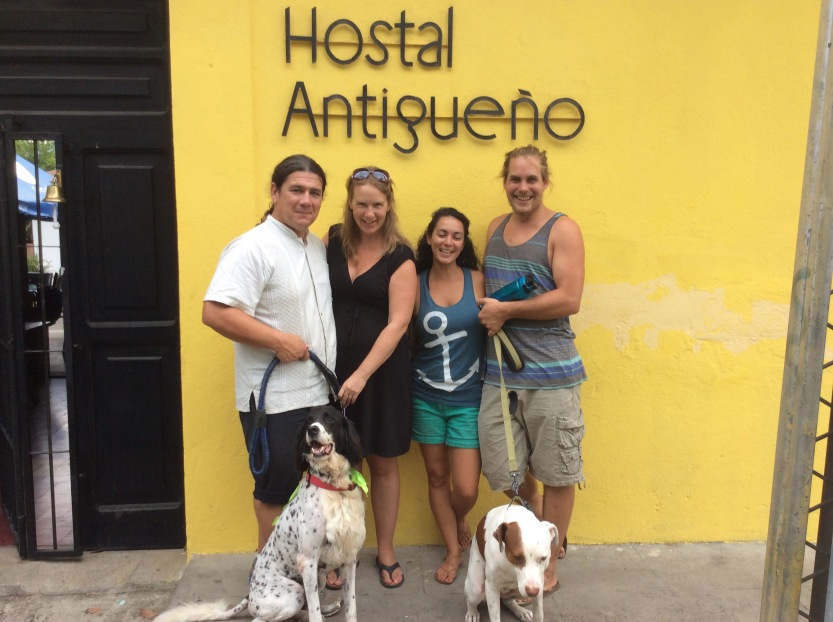 May 13, 2016: Entered the United States at Douglas, Arizona. More on Mexico in another post.